Among all the hot stuff you will do in Rotorua, Tarawera has got to be on the top – literally! Here are some lesser known facts you should know about this beast of a volcano that has a seriously explosive past.

To say that it was ‘big’ is an understatement. The 10 June 1886 eruption of Mount Tarawera is the largest one recorded in New Zealand in the last 500 years. Such was the scale of the eruption that the roar of it could be heard as far as Christchurch (that’s more than 1000km away!). The eruption lasted around five hours and was estimated that ash from it scattered over an area of more than 15,000 square kilometres and reached 10km high. It caused a 17km rift across the mountain top of Tarawera. Some seriously mind-boggling figures.

More than 150 people died, an entire village was buried, a new geothermal valley was created and New Zealand’s biggest tourist attraction was destroyed – all in one night!

Lake Rotomahana, near the mountain, gradually refilled the crater blasted apart by the eruption. But it is now four times its original length, with water level 30 metres higher than before.

10 days before the eruption a local guide and her European passengers saw a mysterious canoe on Lake Tarawera, paddled by Maori in traditional dress. A tohunga, or Maori priest, in Te Wairoa claimed that it was a waka wairua, or spirit canoe, and that it was an omen of a great calamity which would strike the land. He was right; the ‘burnt cliffs’ (that’s what Tarawera means) were on fire shortly after that day.

Another sign of disturbance was the drying out of Wairoa creek, but as people watched the water “returned with a crying sound all along the shores of the lake.”

Mount Tarawera is known to have erupted five times in the last 18,000 years. Situated in the Okataina Volcanic Centre, it is a dome volcano in an area that is a caldera (a collapsed crater). While the time between each of the eruptions is long (700 to 3000 years), the eruptions are 100 to 10,000 times larger than those of cone volcanoes!

Although caldera volcanoes usually erupt rhyolite magma very explosively, the 1886 eruption produced basalt which is less viscous. The mountains you see today are formed of basalt.

There’s evidence of the epic eruption all around. Image thanks to Paula Charmley.

Life before the eruption

Before 10 June 1886, this area was a tourism boom town of New Zealand. As word of the legendary Pink & White Terraces spread to the Victorian world, visitors came in droves. They took the long way in to the “hot lakes”, via a streamer to Tauranga and then coach, because the road connecting Auckland to the area was not built till 1883. Despite the long journey, they still came and couldn’t get enough of what they saw…

In 1873, three hotels were built to house the visiting tourists and it is estimated that the annual income for village residents reached ₤4000 each during these times.

Today you can scree to its crater! 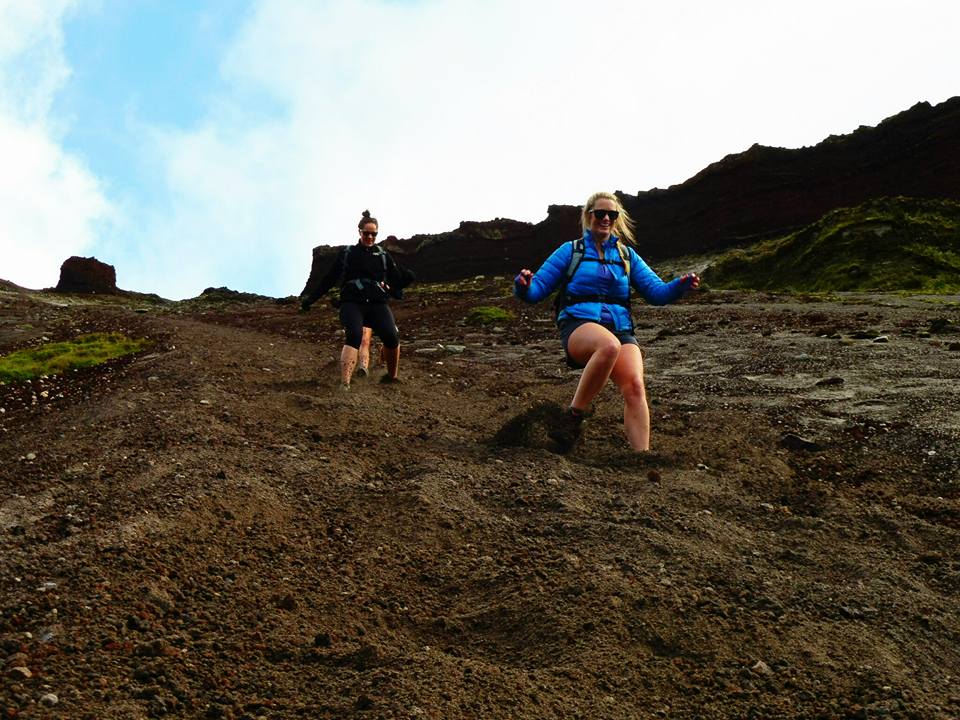 The scree run to the centre of the crater is awesome fun! Image thanks to Paula Charmley.

People still come in droves to this region, chasing views of a steaming and venting earth.  Some lucky ones make it to the top of Tarawera – the mountain that has defined what the land here looks like today. To truly soak in the history, take the bumpy ride to Mount Tarawera (there is no sugar coating the road that leads up to the mountain top), walk to views and colours that are stunning all the way to the summit, and then – the best part – charge into the volcano (a scree run).

As you’d expect, this land is private (owned by the local iwi or tribe) and is immensely greatly revered having redefined the land and life on it. You need permission to even be here, and luckily for you Kaitiaki Adventures not just gets you the permission, but also takes you up there on an incredible guided tour. Check out our Mount Tarawera Crater Walk half day experience.

In the hongi, the breath of life is exchanged in a symbolic show of unity. Through the exchange of this greeting, one is no longer considered manuhiri, a visitor, but rather tangata whenua, one of the people of the land.

Diving head first down the waterfall. 😁🤟
...

Scree run in to the heart of Mt Tarawera. ...

Learn the unique history of our sacred Mt ...

The ultimate Rotorua adventure. 😎 Cheers for ...

Check out the landscape of colours on Mt Tarawera....

We’re inspired by the stunning environment we ...

This error message is only visible to WordPress admins
There has been a problem with your Instagram Feed.